The fundamental right to a lawyer that Americans assume apply to everyone accused of criminal conduct effectively does not exist in practice for countless people across the United States.

People are generally aware of the landmark case "Gideon v. Wainwright" from 1963 which granted the right to an attorney - if the accused can't afford an attorney, a Public Defender ("PD") is appointed. But people are generally less aware of what that actually means, or the fact that roughly 80% of those accused of felonies cannot afford an attorney [1]. I hope to write a longer post some time about how Gideon is actually implemented, but the short version is [2]:

So while Gideon guarantees the right to an attorney, the reality is a bit more complicated. The "adversarial" system that the American legal system relies upon is not really all that fair - District Attorneys ("DAs") have better resources, more people, and complete discretion in choosing what cases they take on, leaving Public Defenders (and their clients) at a drastic disadvantage.

In this post, we'll take a look at a simple comparison of resources in California, one of 27 states that administers indigent defense at the county level. The California DOJ has a number of interesting datasets available, including county-level data on number of employees in the District Attorney's Office and in the Public Defender's Office. Given that roughly 80% of defendants need a Public Defender, a "fair" (albeit oversimplified) system would staff the Public Defender's Office with 80% of the employees of the District Attorney's Office. Unsurprisingly, this is not the case.

A look at California data

The dataset we'll look at below can be found on the California DOJ's website here, filed under "Law Enforcement and Criminal Justice Personnel." Tracking 58 counties from 2004 until 2016, there were only 32 counties that actually reported data on their Public Defender's office. This 2007 report on County-based and Local Public Defender Offices notes that some counties don't actually have a Public Defender office, but rather contract cases to private attorneys. My guess is that the remaining 26 counties indeed contract cases out. The README for this dataset gives a vague explanation of why some counts may be zero:

Of those that did report data, let's compare the size of the Public Defender's office with the size of the District Attorney's office. The plot below shows that relationship; each point represents one particular county in one particular year (looking at all years and counties we have data for between 2004 and 2016). A few things to note:

Is it fair to just compare number of employees?

These are rather rough estimates - comparing total employees is a very simplistic way of comparing "resources." But if anything, we may be underestimating the Public Defender's disadvantage, since prosecutors also have law enforcement agencies on their "side":

Moreover, prosecutor budgets understate prosecutors' competitive advantage, since unlike defense attorneys, prosecutors do not have to pay for their investigative services, which are provided directly by the police, sheriffs, and other law enforcement agencies. A study in North Carolina found that accounting for these sorts of services effectively tripled the amount spent on prosecution in that state.

It should be noted that the DA and the PD provide additional services. For example, a District Attorney's office may include a Victim Services Division; a Public Defender's office may include a Re-Entry Unit and a Clean Slate Unit [4]. These are all roles that don't work directly on prosecuting / defending someone accused of crime, but are still incredibly important. For example, California's Prop 64 has provided the opportunity to help tens of thousands of people have convictions reclassified or dismissed, but Public Defender offices have not seen any additional funding to assist in that effort. A recent article from The Marshall Project explains:

Alameda County Deputy Public Defender Sue Ra said her office hasn’t received any additional funding for post-conviction relief services, which could help attorneys reach more people and process their petitions faster."Somebody needs to do this work, and the Public Defenders are on the ground actually doing it," Ra said. "It would be nice to get the support to allow us the resources to complete work quickly so that our clients don’t miss out on employment and other opportunities."

Is this likely to change?

Looking over the past 12 years, there doesn't seem to be any particular direction in change. The boxplot below shows the distribution of Public Defender office's size, as a percentage of the District Attorney's office - the median Public Defender's office has been steady around 44%. 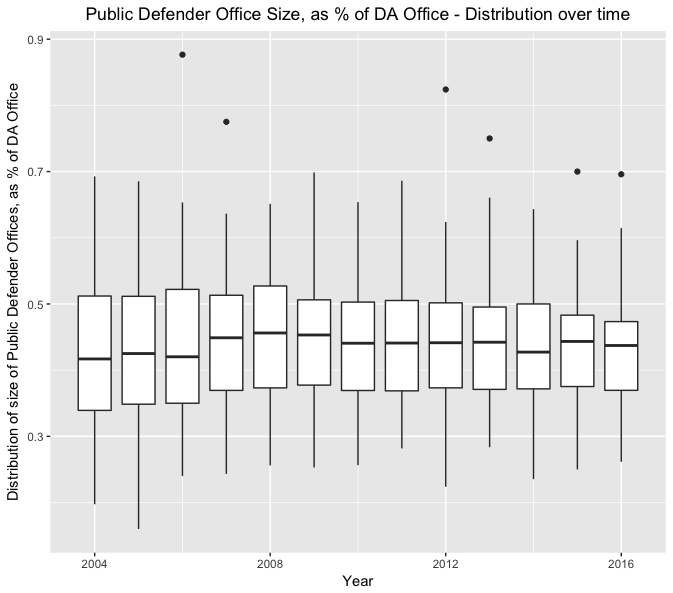 I personally haven't heard much talk of reforming these disparities. One interesting possibility is that Realignment in California will incentivize counties to send fewer people to jail - if a county had more evenly staffed Public Defenders offices, presumably fewer people would be sent to jail. For those not familiar, Realignment was the result of Brown v Plata - California state prisons were operating at 200% capacity, leading to truly horrifying conditions. While we may be focused on numbers here, it's important to remember the human impact behind such rulings - see Justice Kennedy's opinion for further description of the inhumane conditions.

Part of Realignment was to shift a portion of people in state prisons to county jails. Why is that relevant to this discussion? When a District Attorney sends someone to prison for a felony, the cost of incarcerating that individual falls on the state. As a result, an overzealous District Attorney who sends a lot of people to state prison does not affect his or her county's budget. After realignment, however, people convicted of certain lower-level felonies are sent to county jails. The cost of incarcerating that individual is now felt by the county. As John Pfaff notes in his section about Realignment (Location 2445 of his book mentioned before), it's not clear yet whether that increased county cost would cause changes in District Attorney's budgets or behavior.

All code and data used in this post can be found on Github.

[1] See this article from The Guardian. I'm not 100% sure how recent the 80% number comes from, but I did see a few other places reference this report from the Bureau of Justice, written in 2000. I'd be curious to know how that number has changed over time.

[2] See this 2013 report on indigent defense systems run by the state. Among other things, it notes:

Seven states reported that attorneys could reject cases if they exceeded caseload limits.

[3] To clarify - by "median," I mean: if you calculate the size of the PD office relative to the DA office, what's the median of that distribution?

[4] For example, these services all exist in San Francisco - the SF budget book from 2017 mentions them, along with a few other services.