18F and the FBI recently released a new website, the Crime Data Explorer, that provides one central location for a number of FBI reports and data. In addition to exposing an API to use UCR (Uniform Crime Reporting) data, there are a number of datasets available for easy download. They also wrote a blog post announcing the new website.

To take advantage of some of the new data made accessible by 18F, and to contextualize my reading of The New Jim Crow, I explored some of how police forces have changed over time. There's nothing particularly groundbreaking about any of the analysis / plots below, but shows the power of having important data like this accessible for people to analyze.

I chose to look at one of the simpler datasets; the Police Employee Data, available on the Crime Data Explorer here.

Note that "The Uniform Crime Reporting (UCR) Program defines law enforcement officers as individuals who ordinarily carry a firearm and a badge, have full arrest powers, and are paid from governmental funds set aside specifically for sworn law enforcement representatives."

So, let's see how various states' police forces have changed over time. The dataset remarkably goes back until 1970; Nixon first used the phrase "War on Drugs" in June of 1971, and it should come as no surprise that this "war" led to increased numbers in officers. We can see that breakdown by state; I've used a heatmap below, since it allows us to see 3 dimensions easily (state, year, and number of officers per 1000 people). A simpler line plot could be used as well, but would be harder to read (since there would be a different line for each state).

Quick note on the data

I removed both DC and Oregon from the below graphic. Comparing DC to states, which all have some combination of urban areas and non-urban areas, is a bit misleading. DC is completely urban, and therefore has a different makeup than states do. More on that later. 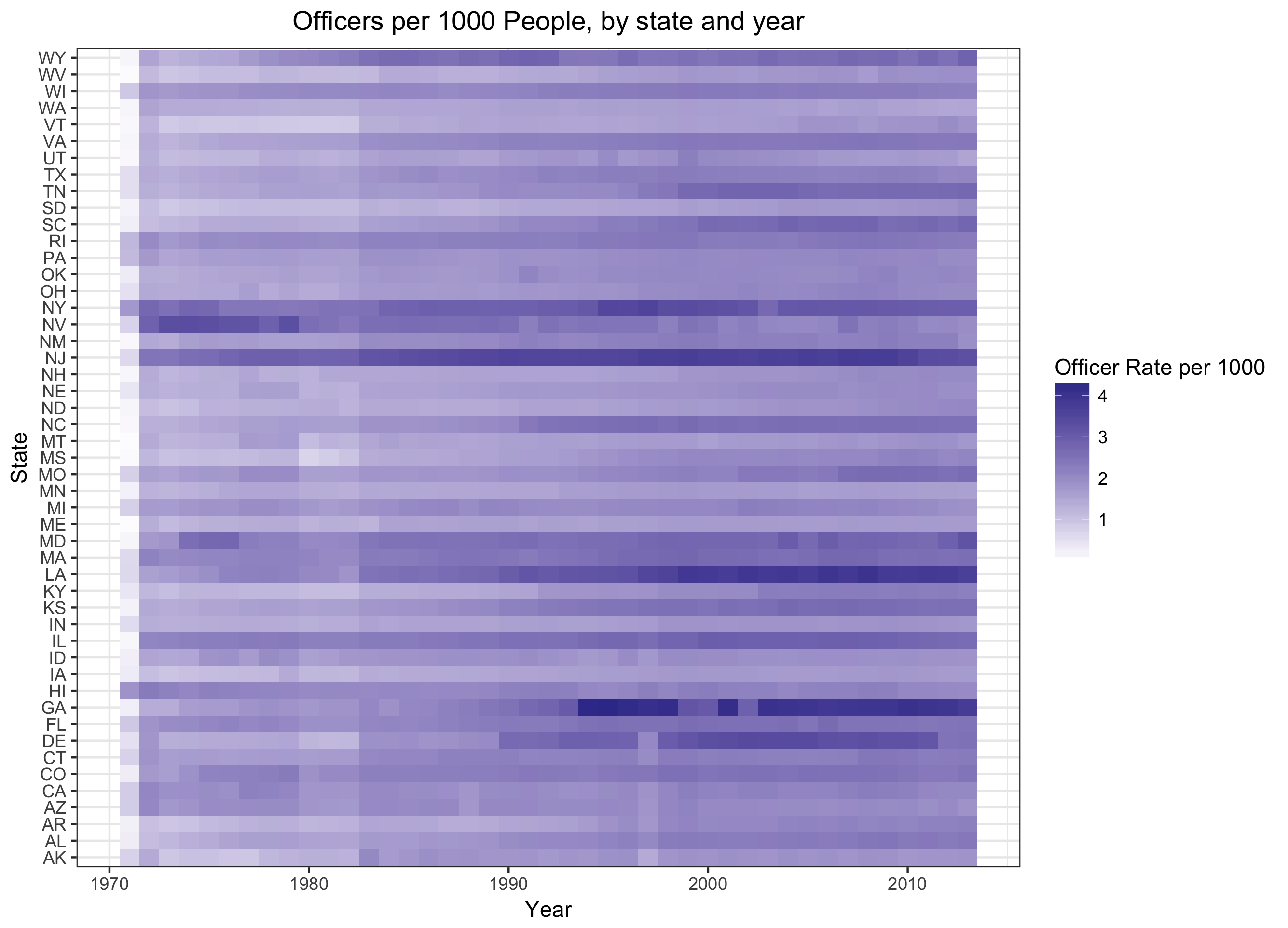 As we would expect, the number of police officers (per 1000 people) has increased pretty significantly over time. A few things stuck out to me: 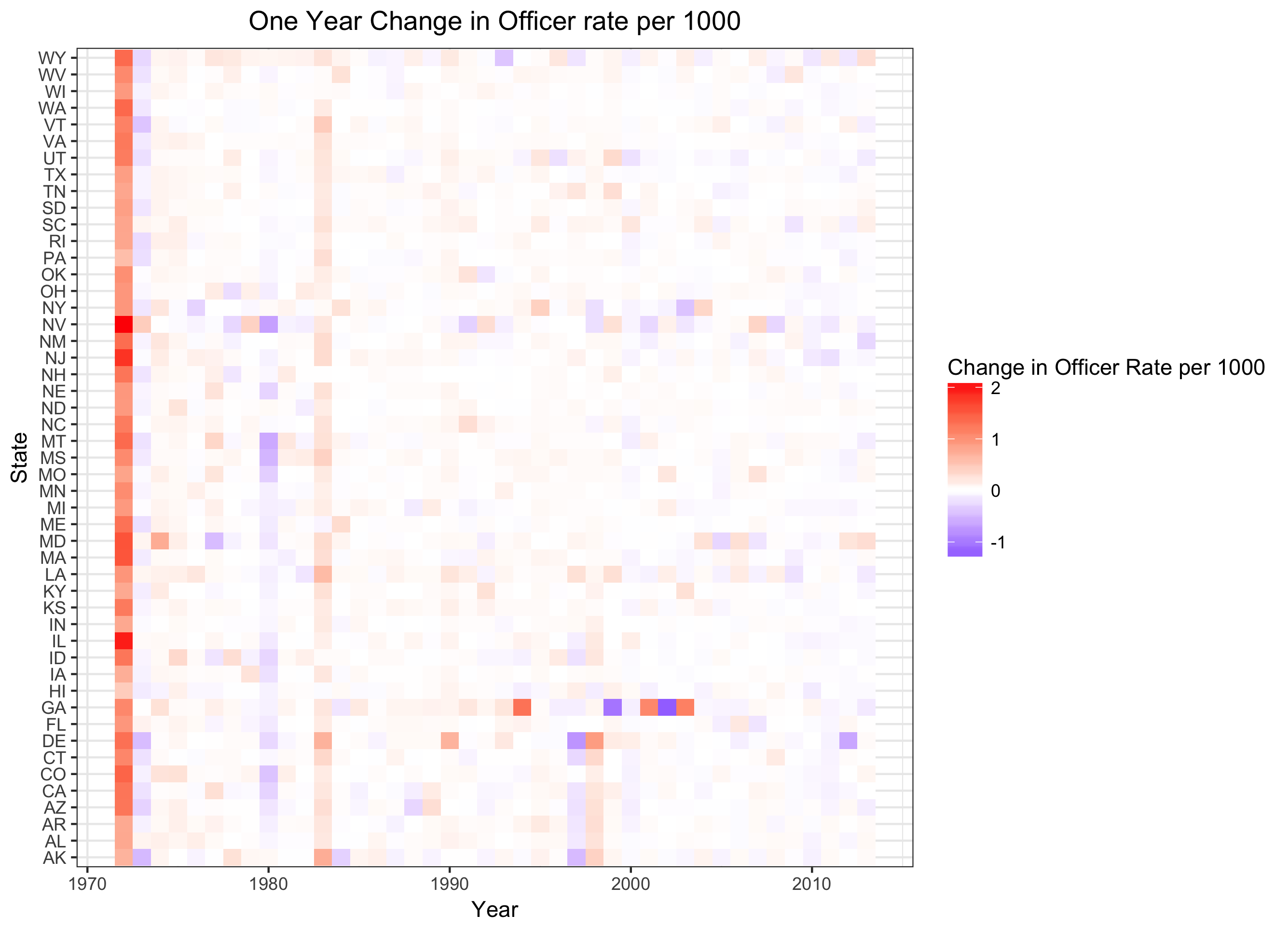 The heatmap of deltas makes this a bit more clear. There was an increase across the board from 1971 to 1972, as well as from 1982 to 1983. These increases line up well with landmarks in the War on Drugs:

President Richard Nixon gave a speech on June 17, 1971, declaring that drug abuse was "public enemy number one." The full text of this speech can be found here. As shown above, there was an increase across all states in the following year (comparing 1972 to 1971).

President Reagan announced a number of initiatives on October 14, 1982 in a speech at the Justice Department. See the full speech, and some more context on that speech. This speech makes eight explicit points, including:

"First, in view of the success of the South Florida Task Force, and because of increasing organized crime involvement in drug abuse, we will establish 12 additional task forces in key areas in the United States."

"And eighth, millions of dollars will be allocated for prison and jail facilities so that the mistake of releasing dangerous criminals because of overcrowded prisons will not be repeated."

Since this speech was given towards the end of 1982, we see the increase across all states in the following year (comparing 1983 to 1982).

I mentioned New Jersey having a lot of police, and excluding DC above because it's completely urban (whereas the states have parts that are urban, parts that are not). So let's see if there is indeed a relationship between how urban a state is, and how policed it is.

The Census website has data about "how urban" states are - this can be defined in a few ways, but the one we're interested in is "Percentage of the total population of the state represented by the urban population ." I used data from 2010, which can be found here, under "2010 Percent Urban and Rural by State", the PctUrbanRural_State.txt data specifically.

Taking a quick look at this data combined with our original dataset of number of officers per 1000 people, there does seem to be a relationship - the more urban a state is, the greater number of police officers. The plot below could use some work (the state labels are messy), but shows the general trend.

There are certainly many other factors at play here, but even a simple linear model shows that how urban a state is can significantly predict how policed it is. See below for full details of that model.

This post only looks at a tiny portion of the data available through the UCR and the Crime Data Explorer. I'm hoping to spend more time looking at some of the richer datasets as well; it's great to see a push for making these kinds of datasets more easily accessible. Thanks for reading!

All of the code used in this post is available on Github - it includes pulling in a few different datasets, calculating the year-over-year changes in officer rates, and creating plots.

The model used to predict officer rates, based on how urban a state is: